"Abstraction," a play by Ryan Paul James, was featured at Theatre Palisades in August. This is James’ fifth play performed in Pacific Palisades. His writing in parts of this play surpasses that in “Lost of Radioland,” “The World’s Worst Play,” “Ever,” “Desperately Seeking Love,” and “What’s so Funny?” and is truly enjoyable.

The concept of "Abstraction" is fascinating because all of the scenes, which could be described as “Saturday Night Live” style-sketches, take place in an art gallery. There are actual paintings on the walls done by upcoming Los Angeles artists. The talent is wide-reaching and provides a nice way of showcasing modern art outside of a gallery.

Additionally, on each of the five nights the play ran, a different artist was invited to display work outside the theatre and in the lobby. They included Allison Moore, Vernon Adams, Chris Bonno, Deobrah Chi, Wanda Williams, Jerry Sabatini and Samantha Ritchie. Works were available for sale after each show.

I would urge Theatre Palisades to put this show into a longer run, making it available to a wider audience.

James is a truly talented writer, which was obvious in several scenes. One especially poignant scene involved a man who came to the gallery each day to look at a painting of a bench. When a gallery worker asked why, the story about an interacial couple was told simply and resonated with the audience.

James needs to rework several sketches including one with the crazy artist because it is too reminiscent of John Belushi’s samurai. Another sketch to reexamine is the crass soap-opera tale at the end, which just becomes confusing and repetitive.

Overall, it’s a funny evening and the play (without an intermission) would do well. Who doesn’t need a good laugh?

I would ask director Katy Jacoby to tone down actors’ mugging. It doesn’t help the script, which is strong enough to stand on its own. The over-the-top melodramatic acting in some scenes detracts from the simplicity of “Abstraction.”


Melissa Disney sings an amusing song about her quest for true love.

“Desperately
Seeking Love is a clever and funny play by Ryan Paul James at the Pierson
Playhouse, 941 Temescal Canyon Rd.

Produced by Palisadian Andrew
Frew, the production opened last weekend, and unfortunately, there are only two
more opportunities to see it- this Saturday and Sunday at 8 p.m. The show, set
in the present, opens with monologues by six characters of different ages
talking about love- how they’ve lost it and their quest to find it. The way the
characters are introduced is reminiscent of “A Chorus Line” or “For Colored
Girls Who Have Considered Suicide When the Rainbow Is Enuf,” but with a sense
of humor.

After the initial
introduction, which garnered laughter from the audience last Friday, each
character performs a second, more in-depth monologue about his/her life. This
becomes a dialogue with voiceovers from outside characters.

For example, 71 year old Bill
(Bernie Kopell, who played ship doctor Adam Bricker in “Love Boat”) went on a
radio show in order to be interviewed by women who might like to date him. He
explained, much to the disbelief and scorn of callers, that if he could plan a
date- no limitations- he would choose a movie and dinner at a local restaurant.

We learn about Tanya (Melissa
Disney) through an open-microphone night. She plays the guitar and sings to the
audience about her hope for love, and it is truly inspired. LOL (laugh out
loud), as her character might say.

Auditioning for a part is
actor Adam (Izzy Diaz), who does exactly what the director

(voiceover) asks, with a
hilarious accent.

I loved Catherine (Katie
Zeiner) the 40-something who confesses to her psychiatrist (voiceover) that
even though she promised no more one-night stands, she forgot.

After the second round of
monologues, the second act ties all of the people together with dinner at a
restaurant. Three tables, three dialogues, depending upon who is in the
spotlight.

I must admit, I never thought
I’d laugh at a Heimlich maneuver, but in the hands of Ray (Richard Horvitz), a
40-year-old virgin, and his date Catherine, there was no way to avoid it. Some
of the funniest scenes of the evening were with the virgin and his
“promiscuous” date as they started to play “Truth or Dare.”

Tanya and Adam, after an
initial bristly meeting, also garnered chuckles as they explore whether they
might become a couple.

The scene with Bill and Sarah
(who will be played by Mariette Hartley this weekend), is written to be
bittersweet, but I would urge playwright James to include more humor in their
dialogue.

Also, a picky point, but if
Bill is 71 and the play is set in the present, he most likely would have served
in Vietnam and certainly not in World War II.

James himself debuted as an
actor in 1994 with the Mickey Mouse Club and has acted in television, stage and
film. He will be playing the part of Ray this weekend- (I wish that audiences
could see Horvitz, whose understated approach and the humor that came from his
lack of confidence was brilliant).

James has directed a
documentary on suicide called “What If” with Art Linkletter and has written two
other plays , “Lost In Radioland” and “The World’s Worst Play, Ever.” Just 36,
he is a young American playwright to watch.

And as Chaim’s son Reuben, Ryan James is excellent, appearing relaxed and
comfortable, both in his role and in his skin. - Cynthia Citron

"A Lonely Impulse Of Delight"

A Lonely Impulse Of Delight, which has Walter (Ryan Paul James) dragging best
friend Jim (Izzy Diaz) out to Central Park at 2:00 a.m. to meet the love of his
life who happens to be a …   Having read the 3-page playlet just before the
show, I was especially impressed by how absolutely alive and real the two
20something actors make Shanley’s stylized dialog and what vivid, complete
characters they have created in less than ten minutes.  First rate direction
here too by veteran character actor Leo Rossi.
--Steven Stanley
April 16, 2009

A Chanukah Carol at Theatre 68 also offers an unlikely juxtaposition. A live holiday radio production of A Christmas Carol during the ‘40s is thrown into potential turmoil when the movie star who would voice Scrooge is unable to get to the studio. The only suitable replacement in the studio turns out to be Jewish, despite his country-Western attire and stage name (Tex Shelton, played by Marty Dusig), and he insists on changing the Christmas references to Chaunkah references before he agrees to do the part.

Katy Jacoby in "A Chanukah Carol"; Photo by Johnny Soto

It’s a stretch, but a fairly amusing one. And the cultural background has an element of truth, considering that plenty of Jews in old-time showbiz were asked to contribute to Christmas shows or movies or songs (Irving Berlin is probably the most famous).

This is not a satirical musical like A Christmas Westside Story. It’s staged in a fairly realistic depiction of a Hollywood radio studio from that era, so the implausibilities are a little more glaring that that they would be in something that’s more stylized from the get-go. It’s also too bad that Ryan Paul James’ script doesn’t allow us to witness the conversation in which the Scrooge replacement negotiates his terms – it takes place behind the scenes, while we’re playing the role of studio audience.

But the script does contain many an amusing moment as the cast struggles with the Jewish references and with the Yiddish, which the sound effects guy helpfully translates on cue cards. The ending adds an ironic twist that makes the whole affair somewhat more credible, although it could be stated a little more clearly.

Lost in Radioland - A Chanukah Spectacular

In Ryan James and Denny Seigel's original comedy, the seasoned cast of a 1940's radio show, featuring the stars of the day, is about to perform their annual holiday classic, "A Christmas Carol." At the last moment their Scrooge is injured, and the only understudy they can find is a Jewish actor who will only perform the piece if all the Christmas references are replaced with Chanukah ones. As the actors and stagehands frantically adjust to the last minute script changes, the on-set live sound effects artist has problems of his own. Punctuated by live (Chanukah) carolers and the clashing egos and idiosyncrasies of the cast, "A Chanukah Carol" is fresh, funny, and a comedy candy cane with a new twist.

Polish it may lack but laughs there are aplenty in Stay Tuned, Ryan Paul James’ amusing mash-up of Charles Dickens’ A Christmas Carol and Orson Welles’ War Of The Worlds, Theatre 68’s holiday gift to North Hollywood and beyond.

Told a la It’s A Wonderful Life: A Live Radio Play, Stay Tuned takes us to Hollywood circa 1950 where writer Tom (Robert Dominick Jones) plans to spice up this year’s Christmas special by terrorizing the nation as Welles did back in ’38, an idea that just might save producer Roger’s (Rick Shaw) career if not his marriage to the improbably Broadway-bound Cindy (Vesna Tolomanoska), though with advertisers threatening to pull out, Roger hasn’t had this bad a feeling since he shared a cabin with Rock Hudson. 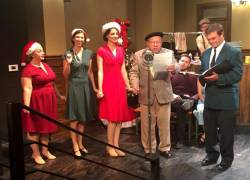 At the very least, tonight’s broadcast still has sponsors Target Cigarettes (“The cigarette nine out of ten doctors recommend”), Golly Jolly Soap (“The soap that keeps housewives happy as they clean their man’s dishes and laundry”), and Max Factor Makeup (“Make sure you don’t look like a monster when you man comes home from work”), their praises sung by the harmonizing Charmin Sisters (Elizabeth Lake, Melinda Mages, and Laura Bevilacqua).

Hedda Clopper’s Hollywood Minute has the hat-bedecked Hedda (MJ Scott) interviewing cutiepie Jimmy Johnson (Danny Gomez), married to Myrna Loy but recently seen canoodling with Esther Williams; dumb blonde Marla Hicks (Tanya Wilkins), who opted for William Holden’s place last night rather than her own (“I figured I’d let his mother worry”); mid-Atlantic-voweled Patty Nelson (Katie Zeiner), who just finished a picture with “Johnny” Wayne; former child star Elizabeth Witherspoon (Lizzy Kimball), who once appeared opposite Jackie Coogan in The Orphan, a tip of the hat to Stay Tuned director Keith Coogan’s granddad; and William Cotton (William Knight), so advanced in years that these days his back goes out more than he does. 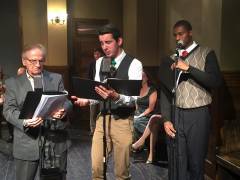 Any hopes of a traditional A Christmas Carol are upended the moment Jimmy’s Bob Cratchit opens his mouth (he’s a dead vocal ringer for Jimmy Stewart’s George Bailey) and even more so when Joseph Steinberg’s (Jordan Wall) Fred wishes his Uncle Scrooge a “Merry … Chanukah.” (The boychik’s mother would kill him if she knew he was doing a Christmas special.)

Then comes the breaking-news flash from announcer Norman Woolcott (Steven Wishnoff) that is script-writer Tom’s ace in the hole. 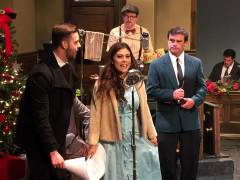 An explosion in an abandoned New Jersey military base has let loose lizard-like monsters bent on wreaking havoc on Bay Head, Bayonne, and beyond, news reported by Pete Prescott (Stephen Jones), with eyewitness accounts provided by Nancy Smith (Brittany Rizzo) and Reverend Bob Smitty (Ed Dyer) and a Presidential announcement by none other than the U.S. Prexy himself (Mark Tracy), and then …

“We now return to A Christmas Carol, already in progress.” 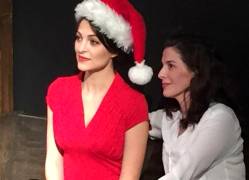 Melissa Disney and Serena Travis have written some delightful songs and radio-jingles, and Disney’s lyrics are a hoot. (“Uncle Bob got the biggest nuts, and he roasts them just for me.”) 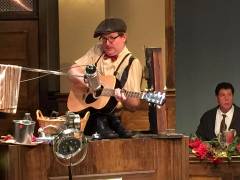 Danny Cistone’s A Time To Kill set has been cleverly modified into a 1950s radio studio, with Graves’ Maxie executing one ingenious Foley effect after another. (Just watching aluminum foil, a drinking straw in a plastic cup lid, upside down bongos, and other paraphernalia get turned into realistic sound effects is an added treat.) Costume and lighting designs are uncredited but just fine. 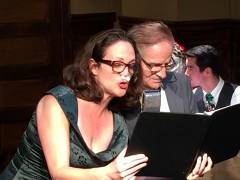 With Theatre 68’s A Time To Kill set to return in January for a three-week reprise, Stay Tuned fills the holiday gap to laughter-inducing effect, and who doesn’t need a bit of Christmas/Chanukah cheer this time of year?